How to Get Started Brewing Your Own Beer

Sick of microbrews and want to try your hand at making beer? It’s easy to get started. You just need a little time.

When you think of nerdy pursuits, beer probably doesn’t land at the top of your list. It might be nice to have one or two on a board game night, but nothing about beer itself seems particularly nerdy. Unless you’ve tried your hand at brewing it, that is.

Brewing your own beer is incredibly rewarding, and not just because you get to drink it at the end. The entire process can teach you not just how beer works, but how fermentation in general works, even when it comes to food. There is also a surprising amount of math involved.

Easy to Learn, Tough to Master

At a fundamental level, brewing is easy. Most of the processes involved in brewing and fermentation actively want to happen. As long as you don’t get too in the way, you’ll end up with something that you can factually call beer.

Brewing well is another story. From picking your gear to choosing your ingredients to controlling the boil and fermentation, there are a lot of ways you can change the flavor of your beer. Some of these are small and hard to notice, while others are the difference between delicious and undrinkable.

One thing to know is that brewing your own beer isn’t going to save you any money. Even the cheapest home-brewed beer will likely cost you more per bottle than a six-pack of decent craft beer. As your recipes get more ambitious, the cost rises even higher.

You could pick and choose every single piece of gear you’ll use for brewing yourself, but you’ll save time and money using a kit. There are numerous online retailers like Northern Brewer, Midwest Supplies, and MoreBeer, all of which sell starter kits. If you’re starting from scratch, you can expect to spend between $100 and $200 on a kit.

Your best bet is to start with a five-gallon kit for brewing extract beers. This is less complex than all-grain brewing and also significantly cheaper. If you’re even remotely serious, avoid the smaller kits like Mr. Beer and others. These make for great gifts, but you’ll outgrow them quickly.

Similarly, don’t jump off the deep end. You can always add on to your kit later, so there’s no need to buy everything you may possibly need someday all at once.

Tips for Your First Homebrew

Nothing is more important when it comes to brewing than sanitizing everything. Unless you’re going to boil it, sanitize it. This means not just your fermentation vessels, but tubing, funnels, and anything else that is going to touch your beer. Any good starter kit comes with some sort of sanitizing agent, so read the instructions and use it. You probably don’t have to worry about getting sick, but outside influences like yeast or bacteria can ruin your beer.

Unless you’ve been helping out a friend on their brew days or you’re otherwise familiar with the brewing process, starting with a recipe kit will save you a few headaches. Creating recipes from scratch is difficult, and you’ll be busy enough just getting your first brew started. The store you bought your gear from likely has extract-based recipe kits that are easy and tasty, and these are a great way to start. 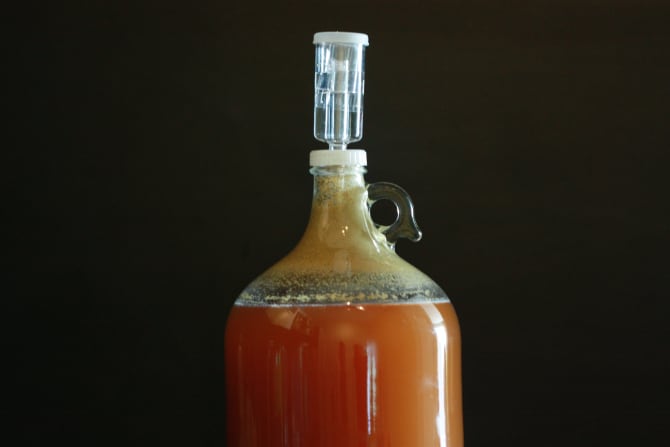 For your first batch, I’d advise going for something that ferments quickly. Almost all ales (the easier variety of beer to brew, compared to lagers) have a relatively quick primary fermentation, but some beers need a length secondary fermentation or aging period. You’ll probably be eager to try your creation, so go for something that will be ready to bottle in two weeks.

Finally, don’t overthink it. Your starter kit and recipe will come with all the instructions you need, and all things considered, it’s pretty hard to ruin a batch of beer as long as you diligently sanitize everything.

Where Do You Go From Here?

Once you’ve got a taste for homebrewing, it can be a slippery slope. Brew a few pre-packaged recipes and you’ll start to understand what you like and don’t like. Then you’ll want to brew your own recipes, and even using extract, this dramatically ups the complexity. Now you’re dealing with choosing the right extract, adjunct grains, and hops, not to mention the yeast to dial in the right balance of sweetness to ABV.

That’s where the hobby begins to get expensive as well. If you decide to go for all grain or even partial mash brewing, you’ll need a bigger brew kettle. Since you’re boiling more water, you’ll want to cool it faster. Want to control your fermentation better? You’ll need to get all your temperatures under control. This all costs money, but can make for better beer overall.

What if you’re not a fan of alcohol? You can still get some of that brewing fix by opting to brew another well-loved beverage: coffee. Temperatures, brew times, and brewing methods all matter greatly here too. Learn more about how to upgrade your coffee without spending much. 4 Ways to Improve Homemade Coffee Without Spending Too Much