Want to spice up your D&D tabletop adventures with some holiday flavor? Use these monsters to turn things a bit more festive.

The holiday season is upon us—and that means it's time for all good DMs to serve up a little present for their players.

No matter how old or jaded your players might be, they'll almost always enjoy a holiday-themed adventure to get them into the holiday spirit. And while the Monster Manual might not have Christmas-themed entries, there are several monsters you can adapt to suit the job.

Eager to throw a bit of festive flavor at your players? Here are some of my favorite D&D 5e monsters to use in encounters during the Christmas season. Adapt them to other tabletop RPG systems, too!

Related: Tabletop RPGs you can play without a game master

Sometimes you might need a monster that can be a stand-in for the star of one of the most famous Christmas songs in the world. Can you guess who that is? We're talking about Frosty the Snowman!

The Snow Golem, which was introduced in the Rime of the Frostmaiden adventure, can make everyone at the table think of their old pal Frosty—you just need to exercise a bit of creativity with it.

For example, adorn it with an old top hat and send it after your players to cause a bit of chaos and spread Christmas cheer.

The Snow Golem is a CR2 creature with all the usual immunities that come with being a construct. It can pose a challenge straight out of the box, but if you want to ramp it up even further for higher-level parties, I suggest adding a few extra hit dice and some cold damage to its attacks. 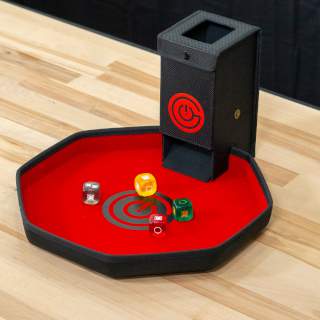 The case stores up to 300 dice and comes with a nesting tray that fits perfectly. The attachable dice tower also folds completely flat for easy transport and storage.

No Christmas adventure can be complete without a trip to see jolly old Saint Nicholas at his workshop. Of course, that doesn't mean the visit needs to go well for the party!

If they've been naughty this year—which is likely since they're D&D adventurers, after all—then they might find that Santa Claus isn't in the best of moods when they arrive.

That's where the Frost Giant comes in. Your party might focus on defeating "Santa" to take his magical items for themselves (that might explain why they're on the naughty list in the first place), or maybe they want to free the giant from a dark curse and save Christmas.

There are many story options available as to how you can incorporate Frost Giant Santa Claus into your holiday D&D adventure.

Beyond your actual description of this "Santa," you can modify him however you want. Maybe instead of swinging a great axe, he swings a sack full of toys (and deals bludgeoning damage).

If the typical CR8 Frost Giant isn't enough of a challenge for the party, expand the encounter by tossing in some Giant Elk reskinned to be reindeer. Give one a Blinding Red Light attack—originating from its nose, of course—for that extra special touch.

Imagine your players walking into a magical grove, surrounded by pine trees. In the center of the clearing is... a massive Christmas tree.

The perfect conical shape. The snow accumulating on its branches. The strings of popcorn and tinsel wrapped around it. They gather near it, awed by the sight before them, when suddenly it starts to move! And, in a fit of rage, starts beating the pulp out of the party.

The Treant is a classic D&D monster based heavily on the ents of Lord of the Rings, but they come with their own distinct powers and abilities that make them sizable threats. They can bring nearby trees to life and cause them to join the fray if they feel their forests are in danger.

Your Christmas treants might have the same physical stats, but perhaps they can't wander off or they'll turn back into normal Christmas trees!

And that's how the Christmas Mimic gets them. When introducing the scene, be sure to describe everything as quaintly and serenely as you can. Lure the party into what seems like a collection of gifts left unattended. Then, when it's too late to back out, have the Mimics strike.

The Mimic, as officially written, is a fairly low-level challenge. But when a group of them suddenly come to life and attack the party, it can be an alarming development—even if it isn't strictly deadly.

If you want, you can always bump up the Mimic's CR by increasing its hit points and damage output. Just remember: it's a fun holiday adventure, and sometimes the image/memory of being half-eaten by a fake Christmas gift can be painful enough for any party.